By Rebecca Green
Posted 16/07/2021
In News
Free Entry to the Axminster Heritage Centre on the centenary of the War Memorial2021-07-162021-07-17https://axminsterheritage.org/wp/wp-content/uploads/2019/04/axminster.pngAxminster Heritagehttps://axminsterheritage.org/wp/wp-content/uploads/2019/04/axminster.png200px200px
Tomorrow on July 17th Axminster will commemorate the centenary of its war memorial. The memorial which was unveiled in 1921 originally bore the names of 66 men who had lost their lives in the ‘Great War.’ After careful research by Axminster Heritage Centre, pushed and supported by the late Douglas Hull, Royal British Legion and Axminster Town Council two additional names – Job Henry Adams and John Norfolk Bevan were added in 2017. Further research conducted by our historian David Knapman has revealed a further six names of Axminster men who died during the First World War taking the total to 75 brave souls whose names are listed below.
To find out more about these men, the Axminster War Memorial, and the war memorials of the villages in the surrounding area such as Dalwood, Chardstock and Membury, visit the Heritage Centre tomorrow to see our current temporary exhibition.
To mark the centenary, entry to the Heritage Centre is FREE tomorrow (Saturday July 17th) for all EX13 residents. 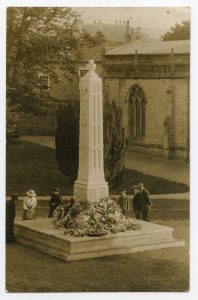