The Heritage Centre is located in Thomas Whitty House, which comprises about half of a large 3-storey stone-built factory structure which was erected by Thomas’ grandson, Samuel Ramson Whitty, in 1828.. Samuel built this new factory to replace his grandfather’s original, which (like so much of Axminster over the years) was badly damaged by fire. That original factory used to stand directly next door to our premises. This is one of the oldest buildings in Axminster and is Grade ll listed. It represents a key aspect of the history of the carpet industry in the UK and internationally.
Thomas Whitty House only gained its present name when it was acquired by AHC a few years ago. After the demise of carpet making in Axminster, our part of the building was re-used as a venue for the County Court when it sat in Axminster, then as the town’s first cottage hospital, and later as the HQ for the local volunteer militia force. Next door, another part has housed the town’s Conservative Club for over 100 years.
The Drill Hall was built in 1912 as an extension to the rear of the main building and was used as a centre for military training. It is an increasingly rare survivor of this type of building.

Thanks to a major grant from Making it Local and grants from HB Allen and the George Eyre Trust this separate building at the rear of the main building was refurbished in 2017.
The Dye House was declared open in May 2017. Brick-built with a slated roof it incorporates a well, and a substantial brick fireplace with cast-iron fire grate (probably Victorian) and water boiler. The Dye House was an essential part of the carpet-making manufactory. It is not clear when the Dye House was actually commissioned by the Whitty family, but we know it was used up until the sale of the replacement factory in 1836. By having its own dye house on site, the business could closely monitor quality and quickly produce special colours for specific contracts. Most sheep produce white, brown, grey and black wool. In Medieval times many woollen products were made in their natural colours, and were not dyed at all. To obtain different colours, the dyer used natural dyes from minerals, the plant and animal kingdom. The dyeing process takes place before weaving but after cleaning. Originally cleaning was done by a process known as fulling (or tucking) This involved pummelling the wool in a bath of stale urine and/or Fuller’s earth before rinsing it in clean water prior to spinning. Scouring was later used to remove the lanolin. Dye was applied by soaking the clean wool in a brass or copper cauldron.
Today we hold spinning, weaving and textile related workshops in the dye house to help to recreate the Fibre Centre in the town.

We aim to recreate the Dyers Garden by replanting the garden space outside the Dye House with plants the dyers would have used. Some possibilities include: 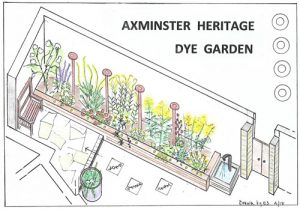 Get Involved
Sign Up For Our Newsletters
Opening Hours