East Devon Residents’ Experience of the First Wave of
Covid-19, Spring and Summer 2020

The Covid-19 pandemic is spreading world-wide, and is certainly not yet over in the UK. However, the fact that many businesses across East Devon are open again after lock-down demonstrates that we have at least reached ‘the end of the beginning’.

We have been exposed to a blizzard of facts and opinions from different sources during lock-down, and distilling an objective picture of what has happened in East Devon is not easy. However, in mid-March, when the Government imposed a national lock-down, the disease was clearly spreading rapidly in several parts of the UK, and threatening to overwhelm the NHS.

Although it may seem unduly ghoulish to base any analysis primarily on death rates, this is probably the most objective way to see what was happening on the health front. Whenever a death occurs it has to be recorded, and a reason for death has to be given. By contrast, if we were to look instead at the number of known cases of Covid-19, it is very hard to get comprehensive, consistent and reliable data. The identification of infections is highly dependent on the intensity of testing, which varies from place to place, and from week to week. So, if we regard a death as ‘the tip of the iceberg’ in terms of the wider health impacts of Covid-19, we are at least using statistics which are reliable and comparable. They are also available at a regional and local level, which is another reason why they are used here.

In particular, this note draws on information from the Office for National Statistics (ONS), including the actual death rates that have been recorded and collated by them, both locally and nationally, from week to week. The primary sources that the ONS uses record where those who died had been living, not just where they died. This is important, because many of the people who died in Exeter came from the surrounding districts, including East Devon. The ONS has also been compiling information on how many death certificates have included any reference to Covid-19 as a contributory factor in deaths.

To be objective and useful, any comparison between different parts of the country needs to take account of what would have happened without Covid-19. To do this we need to compare what has happened in 2020 with what we might reasonably have expected had Covid-19 not arrived, and the best proxy that we have for that comes from what happened in earlier years. To provide this reference point we have used statistics from 2018, because these are the most recent ones to have been broken down to local levels. National week-by-week Covid-19 figures are often compared, in the press, to the 5-year average death rate for the particular week, but that level of detail is not accessible for individual local authority areas, hence the use of 2018 data.

In more normal times, East Devon has one of the highest death rates of all local authority areas in England. If we define the expected mortality rate as the probable number of deaths.

These differences reflect the balance between several social and economic factors. From East Devon’s perspective, one of the most important of these is our above-average percentage of older residents. Set against this, however, is the fact that many of those older residents are fitter than average for their age, and living in a generally healthy environment. The graphic below uses death rates for 2018 to show how East Devon compares with Devon as a whole, with other rural areas, and with England as a whole. 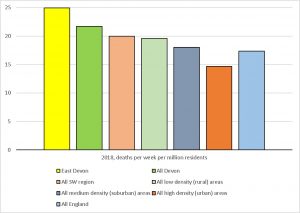 In the immediate run-up to the Covid-19 pandemic, in January and February of 2020, 29.4% of all deaths in East Devon occurred at home, with another 29.4% happening in care homes. The equivalent shares for England as a whole were 23.8% at home and 23.3% in care homes. East Devon’s percentage of deaths taking place in care homes was higher than almost anywhere else in the country. Reflecting these facts, residents of East Devon were less likely to die in hospital, with 36.6% of all East Devon deaths occurring in hospital, compared to 45.7% nationally.

The effects of Covid-19

In the 14 weeks between 14 March and 19 June 2020, 47 deaths of East Devon residents were registered in which Covid-19 was mentioned on the death certificate. This is equivalent to 9.3% of the number of deaths which might have been expected over that same period, based on 2018 records. If all 313 local authority areas in England are ranked from lowest (most desirable) to highest (least desirable) by this measure, the seven ‘best-performing’ areas were Hastings, South Hams (Devon), NE Lincolnshire, Mid-Devon, Norwich, Teignbridge (Devon) or West Lindsey (Lincolnshire). East Devon was not far behind, in 14th place.

Of the 47 East Devon Covid-related deaths, two were at home, 29 were in care homes, and 16 were in hospital. Again, this is very different from the national picture, where Covid-19 deaths in hospital far out-numbered those anywhere else.

If we now compare East Devon’s performance by this measure with the outcomes recorded for the same groupings of local authorities as were used in the first graphic above, we get the first of the two graphics below. ‘Our’ figure of 9.3% was just over half that for the South West region as a whole (16.3%), and only just over a quarter of the rate for England as a whole. In London and other metropolitan areas over 40% of all deaths over this period were Covid-related. In the two worst affected areas, the neighbouring London boroughs of Brent and Harrow, the 14-week death rate linked to Covid-19 was the same as total deaths in a ‘normal’ year, and the overall death rate was twice the ‘normal’ level. At the peak, the rates were considerably higher, and concerns about the NHS being overwhelmed in those areas were very real. 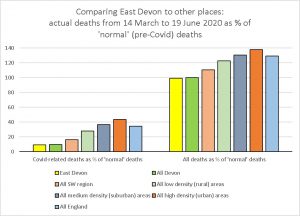 Of course these Covid-related statistics means nothing if other deaths were actually the result of Covid-19, but were not being recognised as such. Hence the second graphic above makes the same comparison for all deaths, whatever their cause. This shows that in East Devon the 910 deaths recorded over that 14-week period matched almost identically what might have been expected in a ‘normal’ year, as it was for Devon as a whole.

This brings up another measure which has regularly been mentioned in the press, namely the concept of ‘excess deaths’. This refers to evidence that irrespective of the causes attributed to such deaths, they indicate that something unusual has occurred. Such data should not be over-interpreted, because there is natural variation from year to year, but the larger the area and the longer the period over which they are measured, the more seriously they should be taken. Indeed this is one way that we can use historical records, such as parish burials registers, to compare the severity of different outbreaks of disease in centuries past.

In this case, however, the statistics show that East Devon suffered no excess deaths over the period when Covid-19 was affecting the UK.

This is not to say that no Covid-related deaths occurred in East Devon, because we know that they did, but at the same time some other expected deaths linked to, for example, traffic accidents, were avoided while most people were staying at home.

Of the 910 deaths which occurred in East Devon over the 14 weeks to 19 June, 280 occurred at home, 272 in care homes, 315 in hospital and 43 elsewhere, which is (in statistical terms) no different from pre-Covid times, and a very impressive tribute to our care homes and social care support networks.

The group of ‘best performing’ local authorities by this all-deaths measure is very similar to the Covid-related list, and is again dominated by authorities in Lincolnshire and Devon. The authorities with the highest death rates relative to normal were all densely populated London boroughs, most of them with disproportionate shares of ethnic minority groups, who have been shown to be particularly susceptible to Covid-19.

The Office for National Statistics also published an interactive map for the three months of March, April and May 2020 showing in more detail where the victims of Covid-related deaths lived. In their map, East Devon is broken up into 20 local areas, and the one that covers Axminster and Hawkchurch shows 10 deaths (five each in April and May). This compares with 10 in Seaton, five in Sidmouth and nine in Exmouth

Over the coming weeks and months we will be seeking to collect more direct evidence of the impacts of Covid-19 on the people and businesses of Axminster and its surrounding area. In particular we are interested in what people were thinking when the outcome was far less certain.

If you would like either to write your experiences down, or to record them verbally, we would love to hear from you.

Due to Covid-19 Restrictions England is in lockdown.   Therefore,  Axminster Heritage Centre is Closed until further notice.