On this day in history in 1860 Axminster Railway Station opened, officially linking the town up to Exeter as part of the London and South Western Railway’s (LSWR) main line between London (Waterloo) and Exeter. The decision had caused much debate in parliament and when the Yeovil to Exeter route was chosen in 1856 it was described as: ‘[…] the greatest revolution since the Black Death.’ (Dudley, 1988, p. 141). 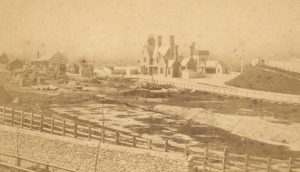 The station, which was designed in 1859 in mock Gothic style by the Victorian architect, Sir William Tite and Edward Clifton, significantly increased the prosperity in the town as it brought tourists to the area who often chose to stop off in the town on their way to Lyme Regis, as well as visiting Axminster itself. Many of the local inns and hotels benefited as a result and The George Hotel famously ran a horse-bus which met travelers at the station as can be seen in the images. Horse-buses were not limited to just the town however, and there were regular services in operation between Axminster and Lyme Regis along with the outlying villages. 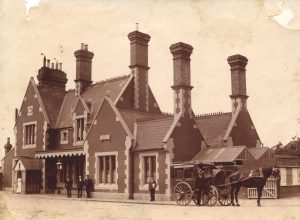 Axminster Railway Station with a coach from The George Hotel waiting to pick up passengers, c1900

On 24 August 1903 the branch line from Axminster to Lyme Regis was opened but sadly closed in the 1960s as a part of the ‘Beeching Cuts’. Dr Richard Beeching was the Chairman of British Railways Board in the 1960s and was responsible for the closure of thousands of stations as a result of the findings of his report, ‘The Reshaping of British Railways,’ which was published on 27 March 1963. Beeching cannot be held wholly accountable however as between the World Wars over 1,300 miles of unprofitable railway had already been closed by the railway companies. Axminster however, as a principal station on the main line between London (Waterloo) and Exeter survived the cuts and today is a popular and widely used station with a café situated in the old goods shed.