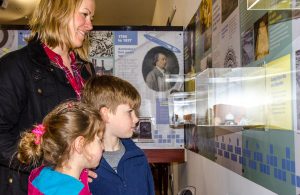 Record visitor numbers, major building renovations and significant grant funding secured were just some of the achievements of Axminster Heritage Ltd. over the last year. Speaking at the AGM, Chairman John Church said the Centre is a community asset which is now well on its way to success. The outstanding results over the last year were testimony to, and in no small part due to, the efforts of the many local volunteers, supporters and stewards who had given their time and talents.

Over 4000 visitors have been welcomed since the Gallery opened at Easter – from Michael Portillo, bringing the Centre national TV coverage to local school children enjoying a variety of activities. All the artifacts from the old Town Museum were now at the new Centre and their cataloguing well on the way to achieving the important Arts Council Museum Accreditation.

In the Gallery a temporary exhibition had been very popular, several talks about the history of Axminster sold out and outreach activities such as ‘By the Loom’, a monthly spinning and weaving group, had been busy.

A new lift installation to The Bradshaw Meeting Room now provides improved access for its hire to residents, clubs and business all year round.

On the money front, Round One Heritage Lottery Funding was awarded and the busy calendar of community fundraising events continued with the Axe Vale Community Choir concert in the Minster, an evening with The Two Rivers Band, a Race Night and various coffee mornings. Many other evenings and activities were now being planned as around £200k has to be raised because grants, such as those from Heritage Lottery Fund, are conditional upon Axminster Heritage raising additional funds. News of other bids is awaited which, if successful, would allow work this winter to rescue the old dye house and provide a new toilet block.

In his AGM address John Church paid tribute to the late Sir Neville Marriner who was Patron and had generously given his time and talent to make the Heritage Centre a reality. He also expressed his delight at the recent appointment of a new President, David Fursdon, Lord Lieutenant of Devon.

He went on to say, ‘Looking forward we still have a huge amount to do to continue building on our success. We’d therefore welcome new volunteers to join us and help realise the potential of Axminster Heritage for the future of the town’