This section focuses on ‘the history of Axminster’. Links are given, both within the overview below and in the column on the right, to more detailed information on the subject.

In addition there is more comprehensive information on specific themes in each of the following sections of this website: Industry and Commerce; People; Buildings; Rural and Farming.

Axminster is a town with a long history (See Timeline) and eventful past (See Notable Events). Over centuries the town has grown (See Town Expansion) link with a population size (See Population Growth) reflecting world events and local challenges. Throughout its history notable individuals (See People) have made their mark on the town and its architecture (See Buildings).

With origins in the Bronze and Stone Ages, Axminster’s early settlers would have taken advantage of the position by the river. The Axe was navigable with trade in wool, cloth and hide when the Romans invaded in AD43. The Romans built the Fosse Way which skirted what is now the northern end of the town near Woodbury. They built a fort and checkpoint and a small town grew above the river crossing. In AD410 the Roman legions left and by the beginning of the 7th century the Saxons had moved into Devon from the East and the town fell into their hands. By the beginning of the 8th century the town had a monastic church and in 755 it was first mentioned by name as Ascan- or Exanmynster, the Church by the River.

The town grew in importance, becoming the fortified stronghold, a burh’, at the centre of a royal estate. There were repeated raids on Devon by the Vikings in the 9th century and in 937 there was a major battle between the Saxons and the Vikings, resulting in 9000 dead. Among those were five Danish Kings and seven Saxon Earls who were buried in Axminster.

In 1086 the Domesday Book recorded substantial settlements at Axminster and at Kilmington, Musbury, Colyton and  Axmouth.(See Local Parishes). These were rural places where inhabitants were largely engaged in farming and living off the land. (See Rural and Farming) 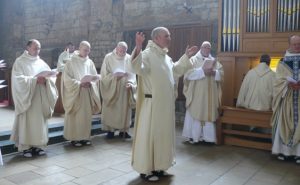 In  1246 the Manor of Axminster was given to the Cistercian monks who built an Abbey at Newenham (See Buildings) to join those they already had at Forde and Dunkeswell. The monks allowed Axminster to establish ‘burgage plots’- long, narrow rental properties- which extended the settlement’s boundaries and were an important step in the transition from a village to a town.

Despite the ravages of the Black Death in 1346 the Abbey flourished, particularly its trading in wool, until the Dissolution of 1539 when it was surrendered to the King’s Commissioners. In 1605 the Manor of Axminster was bought for £7200 by Baron Petre of Writtle (Essex) whose family held it for over 200 years (See 1778 Haywood map of holdings in Axminster)

More than a century of religious unrest following the Dissolution led to a Civil War. In 1644 Royalists used Axminster as a base to lay siege to Lyme Regis. The siege failed and Parliamentarians from Lyme attacked Axminster, burning it to the ground. Axminster suffered the most complete damage of any English town during the Civil War. Lord Petre estimated his costs for rebuilding Axminster at £10,000. He is known to have rebuilt at least 200 houses and workshops (See Town Expansion map)

The Duke of Monmouth’s rebel army swept through Axminster in 1685 but they were defeated by the Royal army at the Battle of Sedgmoor. In 1688 William of Orange landed at Brixham with a force of 15,500 men. He had been invited by politicians concerned at James II’s Catholic leanings. He met John Churchill, Commander in Chief of the Royalist army at the Dolphin Inn who defects from James II to join him and The Glorious Revolution. 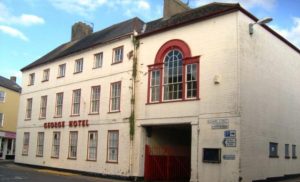 The first coach service from London to Exeter, via Axminster, had begun in 1658 but in the 1750s the turnpikes brought the coaching age to Axminster. The George Inn, built on its current site in 1759, became the town’s premier coaching inn. Axminster was also on the road route from Falmouth in Cornwall to London’s Admiralty bringing news of the Napoleonic Wars. In 1805 despatches came through the town with reports of the victory at the Battle of Trafalgar and Nelson’s death.

As transport improved, trade prospered. Axminster’s world-famous carpet industry  was started in 1755 when Thomas Whitty  set up his Axminster Carpet Manufactory using a new perpendicular frame loom for knotted carpets. The business was very successful, weathering a fire in 1828 which completely destroyed the factory and a move to rebuilt premises. It ran as a family business until 1835 when it was declared bankrupt and the machinery was moved to Wilton.

By 1836 Axminster’s only remaining manufacturer was Messrs Hallett & Fowler’s tape-making business on North Street. The first railway line had reached Devon by 1844 but not Axminster, so a 16-year period of relative disadvantage compared with much of East Devon then started. Axminster was finally connected to the rail network in 1860 giving a boost to the town’s commercial opportunities.

There have been a number of successful businesses (See Industry and Commerce) link in the town including an iron foundry, a brush- making factory specialising in toothbrushes and precision engineering works, all of which have now ceased trading. Still very much in business today are the world-famous carpet industry, restarted by Harry Dutfield in 1937, a feather factory and diverse retail and catering establishments.

For centuries there was a weekly cattle market in the town until it finally closed in 2006 in the aftermath of the foot and mouth outbreak. Dairy farming continues to be an important aspect of rural life but many farmers are now diversifying their income streams with artisan products and a move into tourism.

The Axminster of history has weathered plagues, wars, fires and economic uncertainty. Today’s Axminster is a town moving forward.

If you are interested in finding out more about the history of Axminster, please see our selections of the best books about Axminster and its surrounds. We also offer help with locating and interpreting old maps and relevant online resources.

• A Selection of Notable Events 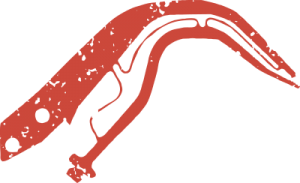