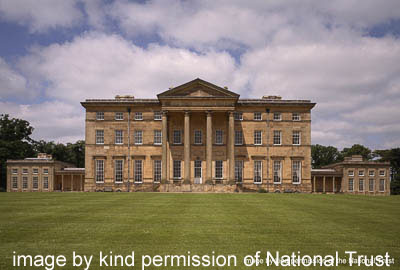 Attingham Park was designed by George Steuart, a follower of James Wyatt, whose only surviving country house this is. It was built from 1772 to 1785 for Noel Hill, 1st Baron Berwick, on the site of an earlier house called Tern Hall (which had been built to his own designs by Richard Hill of Hawkstone). The proportions have been criticised: for Simon Jenkins “The facade is uncomfortably tall, almost barracks-like, the portico columns painfully thin”. There is a large entrance court, with an imposing gatehouse, and two single storey wings stretch out to either side of the main block.
In 1805 John Nash added the picture gallery, a project that was flawed from the beginning as it suffered from leaks. Constructed using cast iron and curved glass to give the effect of coving, it throws light into the gallery below. In 2013 work began on building a new protective roof above the delicate Nash roof, replacing one installed in the 1970s with a new one which will stop leakage and reduce natural weather wear. The new roof will have temperature control, blinds, and UV resistant glass. The 2nd baron went bankrupt, and all the contents of the house were auctioned in 1827; some were reacquired later. The main reception rooms were divided into a male and female set on either side of the house. Angelica Kaufmann decorated a boudoir and there are three of her paintings in the drawing room. (Wikipedia)

The carpet is Short-Warped – ie it’s width is greater than it’s length. There is at least an inch missing all round – what would be a five knot/row black outer border. The fire place cut out is original 31” by 76” wide. An architect, or professionally, designed carpet of great complexity and intricacy of design, subtlety of colour and shading. The overall impression is of rich, strong blues and black, and bold use of scarlet bands.
Main field ground colour is black but the blues of the rays around the central roundel predominate. Very skilfully shaded blue rays, radiating from the central roundel in four sections and decorated with four small different stylised motifs.