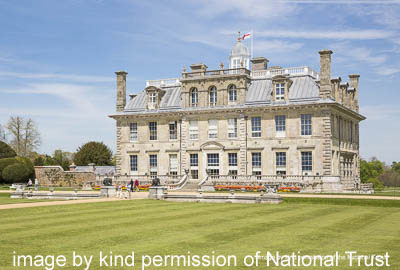 A country house and estate near Wimborne Minster, Dorset, England. It was for many years the family seat of the Bankes family who lived nearby at Corfe Castle until its destruction in the English Civil War after its incumbent owners, Sir John Bankes and Dame Mary, had remained loyal to Charles I.

Details
The house was built between 1663 and 1665 by Ralph Bankes, son of Sir John Bankes, to a design by the architect Sir Roger Pratt. It is a rectangular building with two main storeys, attics and basement, modelled on Chevening in Kent. The gardens and parkland were laid down at the same time, including some of the specimen trees that remain today. Various additions and alterations were made to the house over the years and the estate remained in the ownership of the Bankes family from the 17th to the late-20th century.
The house was designated as a Grade I listed building in 1958 and the park and gardens are included in the National Register of Historic Parks and Gardens at Grade II. The house was accepted by the National Trust in 1982, after the death of another Ralph Bankes. The house and gardens are open to the public. (Wikipedia)

Described by the Guide Book as an Indian all-over design. Sarah Sherrill calls it “eastern inspired stylised floral designs”.
Main field on a reddish ground five main motifs ,actually arranged in squares, with a small white square of four triangles at each corner, but the overall effect is of a random all-over design. The five motifs are: Small white square divided into four triangles. White leaf, with a blue and rose centre, and a stylised stem growing out of it with a rose tulip at the top. Stylised open rose with five different motifs issuingnfrom it, including stylised tulip and carnation. Two strap-work floral groups.
All the motifs are outlined in black.
Outer Borders, 16″ border of stylised rosettes and leaf rosettes, linked with stems and smaller flowers and leaves. Everything outlined in black.
Inner Border 4 1/2″ border – stylised leaf-and-flower. Again, the black outlining.
Guards 1) Single-knot x three knot zig-zag (as in earlier Axminsters) 2) Plain banded guard, with five knots for the guards along the sides, and six knots for the end ones (again, common in earlier Axminster carpets.)