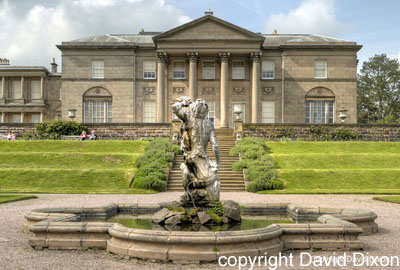 Around 1716 a new house was built on a separate site for the Egerton family. From 1758 improvements were made to the house and between the 1770s and 1816 most of it was replaced by the present neoclassical mansion, designed by Samuel Wyatt and his nephew Lewis William Wyatt. Further additions to the house were made in 1861–62 and in 1884. During the late 19th century large house parties were held in the hall, some of them attended by British and foreign royalty.

The mansion contains much of the furniture made for its occupants by the family firm Gillows of Lancaster. There are over 150 provenanced or marked Gillow examples. Also in the hall is a large collection of paintings, many of them being portraits of the Egerton family, and in addition paintings by Canaletto, Poussin, Chardin, Van Dyck, Vasari, and many others. The Library contains first editions of two novels by Jane Austen. One room is dedicated to a collection of items from around the world assembled by the last owner of the house, Maurice Egerton. In the family wing are the servants’ quarters. These include rooms containing much of the equipment and many of the utensils used to serve the family. (Wikipedia)

Now one-third of the original carpet, which was made to fit the library. This remaining third consists of five concentric circles, one of which contains the signs of the Zodiac for the winter months, and a small part of the diapered main-field infill.
Central roundel – a carefully shaded patera in buffs and browns
1st circle – the sun’s rays, again carefully shaded, crescent moons, some appearing horned.
2nd circle – Laurel leaf and berry divided by six smaller cicles containing Libra, Scorpio, Sagittarius, Capricorn, Aquarius and Pisces.
3rd circle – Stars
Main field – Wyatt’s ‘mosiac’ of diamonds each containing a flower, one design with double pointed petals, the other with round petals