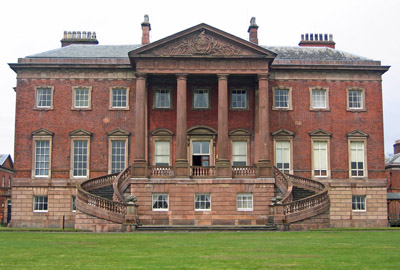 Tabley House is a former stately home near Knutsford, Cheshire. The house is recorded in the National Heritage List for England as a designated Grade I listed building. It was built between 1761 and 1769 for Sir Peter Byrne Leicester, to replace an older hall nearby (Tabley Old Hall), and was designed by John Carr.
The house is symmetrical and designed in Palladian style. It is constructed in brick with stone dressings, with a large sandstone portico on the south front. On the east and west sides of the main house are pavilion wings connected to the house by curved corridors. To the west of the house is St Peter’s Church, also listed Grade I, which was moved from a position adjacent to Tabley Old Hall to its present site in 1927. In the grounds are other listed buildings, including the ruins of the Old Hall.

Details
In the early part of the 19th century three of Carr’s rooms on the west side of the house were converted to form a single room, the gallery. After Sir Peter’s death the house was re-orientated and the main entrance moved from the south to the north front. The house and estate continued to be held by the Leicester family until the death of Lt. Col. John Leicester Warren in 1975.
Under the terms of his will the house, contents and estate were offered to the National Trust who declined the offer. The house was then acquired under the terms of the will by the Victoria University of Manchester, and the house was used as a school. The carpet was sold at Christies in June 1996, where it fetched around £125,000.
(Wikipedia)

Floral carpet on a strong pink ground with rococo border.
Main field – Each quarter identical. Four flower spray designs in each with identical floral- bouquet in each corner. Scallop shell in a cartouche at each end hold more bouquets. centre side have conche shells with trailing acanthus.
Central roundel – A large central bouquet of flowers, teid with blue ribbon, including hyacinth, bourbon rose, anemone and one orange fritillary – Crown Imperial. Encircled by eight entwined corn and flower garlkands, containing three different designs in them.
Inner border – ‘spiralling pole’ on moss green with rose, striped inner and outer guards.
Outer border – Egg and dart within rose guards.
The carpet is no longer at the property for which it was made – sold at Christie’s.