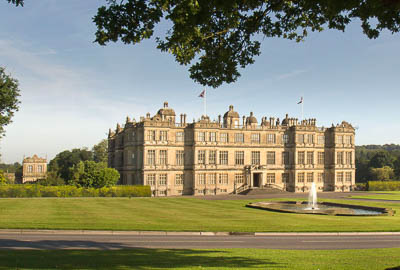 An English stately home and the seat of the Marquesses of Bath. It is a leading and early example of the Elizabethan prodigy house. It is adjacent to the village of Horningsham and near the towns of Warminster and Westbury in Wiltshire and Frome in Somerset. It is noted for its Elizabethan country house, maze, landscaped parkland and safari park. The house is set in 1,000 acres (400 ha) of parkland landscaped by Capability Brown, with 4,000 acres (1,600 ha) of let farmland and 4,000 acres (1,600 ha) of woodland, which includes a Center Parcs holiday village. It was the first stately home to open to the public, and the Longleat estate includes the first safari park outside Africa.

Details
The house was built by Sir John Thynne and was designed mainly by Robert Smythson, after Longleat Priory was destroyed by fire in 1567. It took 12 years to complete and is widely regarded as one of the finest examples of Elizabethan architecture in Britain. Longleat is occupied by Alexander Thynn, 7th Marquess of Bath, a direct descendant of the builder; however, the peer passed the management of the business to his son Viscount Weymouth early in 2010.
(Wikipedia)

Remnant of a larger carpet. Indo-Persian, open flowing design of large and small palmettes on a ‘trellis’ of stems and leaves. On an Etruscan Red gound what looks like a fairly straightforward repeated design of aplmettes linked with leafy stems, in fact contains more than fourteen different elements, including five main palmette designs and raceme motif. Main border on the same ground as main field, alternating rosettes in pink and white on a stiff trailing stem with very stylised leaves. Stourhead Saloon and Chatsworth Sate Bedroom both have identical main field designs, but differing borders. Christies inventory for Longleat gives a date of 1780 but there is no definite evidence for this. The carpet was formerly in the Green Library, a room set up for the 2nd Marquess of Bath by the architect, Sir Jeffry Wyatville in the early 19th century