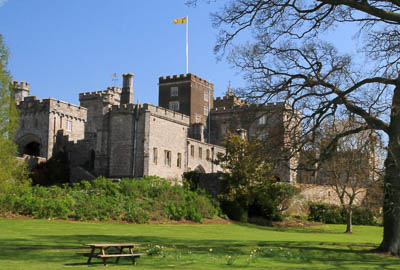 A fortified manor house situated within the parish and former manor of Powderham, within the former hundred of Exminster, Devon, about 6 miles south of the city of Exeter. It is situated on flat, formerly marshy ground on the west bank of the River Exe estuary where it is joined by its tributary the River Kenn. The castle was expanded and altered extensively in the 18th and 19th centuries, most notably by James Wyatt in the 1790s. The castle remains the seat of the Courtenay family, Earls of Devon. The spectacular Music Room, designed by James Wyatt in 1788 for the flamboyant 3rd Viscount of Devon, has an Axminster carpet made in about 1798 by Thomas Whitty. Since 1745 the second library has extended the chapel wing, the two low rooms either side of the clock tower have been converted to bow-window fronts, and the castellated gatehouse tower, which might have blocked this view, has been demolished. In addition, the harbour on the River Kenn, which here flows into the River Exe, has been altered by landscaping.
Powderham Castle has been a Grade I listed building since 1952, and recognised as an internationally important structure. The staircase, hall, music room and master bedroom of the house were used as locations for the 1993 film The Remains of the Day.

Details
The original building on the site was a fortified manor house, the appellation ‘castle’ was added probably no earlier than the 17th century. The building has never been a true castle, that is to say with a keep and moat, although it did possess a curtain wall and yard on the east side (now the rose garden) as shown in the 1745 engraving by Buck. Leland mentioned a barbican or bulwark in this area, but these were demolished as part of the 18th-century landscaping works designed to provide an uninterrupted view from the lower rooms towards the Exe Estuary. Many castle-like elements on the west front (main entrance) were added in the 19th century. The gatehouse was built between 1845–47 to a design by Charles Fowler. The tall rectangular structure beyond with a tower to the north is essentially the original fortified manor house. The projection from the lower storey to the north in lighter stone with three Gothic-style windows is the Victorian dining hall, designed by Fowler.
(Wikipedia)

In three sections to reflect Wyatt’s ceiling. Main ground is made up of twining roses in light and mid pink. The central rectangle has identical, rose-filled flower baskets in each corner and two huge crossed plam fronds, with flowers, reaching to the centre circle. The rectangular end sections have central rose garlands with auricular, tulips, convolvulus and frilled carnations, surrounded by repeated flower garlands. The central roundel is a circle filled with musical instruments in shades of buff, with flower garlands, enclosed in a 12” border of linked rosettes. Drum, high trumpet, cello, viola, flute or recorder, pan pies, a pre-valve French horn, tambourine. Inner border enclosing the three sections of the carpet is a scrolling acanthus in blues, buffs and olives with cartouches in the corners.