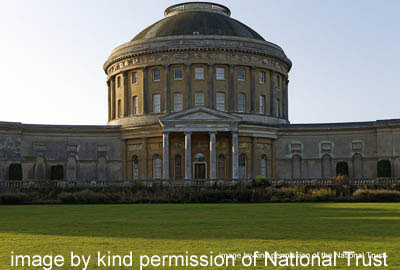 As one of England’s more unusual houses, Ickworth has been unflatteringly described as resembling “a huge bulk, newly arrived from another planet” and as “an overgrown folly” Yet, is now being architecturally reassessed and recognised as the only building in England comparable with the monumental works of Boullée and Ledoux.
The design concept was based on the designs of Italian architect Mario Asprucci, most noted for his work at the Villa Borghese, which the Bishop-Earl had seen. Asprucci’s plans were adapted and the building work overseen by English architects Francis Sandys and his brother Joseph Sandys.
The façades are of brick covered in stucco; beneath a roof of slate and lead. The central rotunda is 105 ft. high with a domed and balustraded roof. the building is entered through the central entrance ionic pedimented portico.
The rotunda is decorated with pilasters, which on the lower floor are Ionic and Corinthian above. The ground and first floor and the third floor and the balustraded parapet are divided friezes bas-relief.

Details
The house built between 1795 and 1829, was formerly the chief dwelling of an estate owned by the Hervey family, later Marquesses of Bristol, since 1467. The building was the creation of Frederick Hervey, 4th Earl of Bristol and Bishop of Derry who commissioned the Italian architect Asprucci to design him a classical villa in the Suffolk countryside. The Earl died in 1803, leaving the completion of house to his successor.
(Wikipedia)

A bizarre design. A small, hooked central medallion on a buff main-field, covered with a diaper pattern of tiny brown 5 sided shapes. The corners separated from the main field by pink scalloped bands and filled with a strange assortment of angular shapes on a dark background. At each end there are rectangular panels with pink, angular rosettes and fork-like arms on a brown ground. The panels enclosed in a green border with pink flowers around a white trailing stem. The main, wide border has huge pink stars on a cream background with blue and green strap work between. The guards to this border have pink chevron shapes on a blue ground.