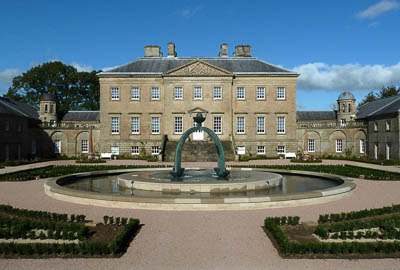 Dumfries House is a Palladian country house in Ayrshire, Scotland. It is located within a large estate, around 2 miles west of Cumnock. Noted for being one of the few such houses with much of its original 18th-century furniture still present, including specially commissioned Thomas Chippendale pieces, the house and estate is now owned in charitable trust by The Great Steward of Scotland’s Dumfries House Trust, which maintains it as a visitor attraction and hospitality and wedding venue. Both the house and the gardens are listed as significant aspects of Scottish heritage.

Details
The estate and an earlier house was originally called Lochnorris, owned by Craufords of Loudoun. The present house was built in the 1750s for William Dalrymple, 5th Earl of Dumfries, by John Adam and Robert Adam. Having been inherited by the 2nd Marquess of Bute in 1814, it remained in his family until 2007 when 7th Marquess sold it to the nation for £45 million due to the cost of upkeep.
Due to its significance and the risk of the furniture collection being distributed and auctioned, after three years of uncertainty, in 2007 the estate and its entire contents was purchased for £45m for the country by a consortium headed by Charles, Prince of Wales, including a £20m loan from the Prince’s charitable trust. The intention was to renovate the estate to become self-sufficient, both to preserve it and regenerate the local economy. As well as donors and sponsorship, funding is also intended to come from constructing the nearby housing development of Knockroon, a planned community along the lines of the Prince’s similar venture, Poundbury in Dorset.
The house duly re-opened in 2008, equipped for public tours. Since then various other parts of the estate have been re-opened for various uses, to provide both education and employment, as well as funding the trust’s running costs. (Wikipedia)

Oval framed centrepiece with a very formalised rosette on a dark slate-coloured ground. Exchequier main field of two shades of pinky-brown triangles with some hexagons; spandrels of two tones of rose pink acanthus with a white acanthus spray on top. Main border of large shells in ‘grisaille’ – very skilfully shaded – enclosed on the inner side by five striped guards of three and four knot widths in white, rose and buffs. On the other side by a narrow border looking like architectural battlements. At either end an urn of formal flowers lying across the main border and projecting into the main field. Lord Dumfries was in London from January until March 1759. In the archives at Mount Stuart is an invoice for an Axminster carpet dated 8th March 1759 for £33.6s