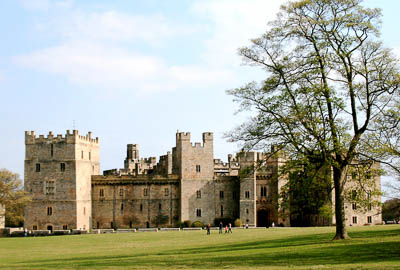 Built by John Neville, 3rd Baron Neville de Raby, between approximately 1367 and 1390. Cecily Neville, the mother of the Kings Edward IV and Richard III, was born here. After Charles Neville, 6th Earl of Westmorland, led the failed Rising of the North in favour of Mary, Queen of Scots in 1569 Raby Castle was taken into royal custody.
The castle is still a private home and remains the seat of the Vane family, the Barons Barnard. Due to the 11th Baron’s dedication to the extensive renovation and restoration works, much of the castle’s rare interior architectural features have been preserved.

Details
Sir Henry Vane the Elder purchased Raby Castle in 1626 and neighbouring Barnard Castle from the Crown, and the Earls of Darlington and Dukes of Cleveland added a Gothic-style entrance hall and octagonal drawing room. From 1833 to 1891 they were the Dukes of Cleveland and they retain the title of Lord Barnard. Extensive alterations were carried out in the 17th and 18th centuries. It is famed for both its size and its art, including works by old masters and portraits. It is a Grade I listed building and open to the public on a seasonal basis.
(Wikipedia)

Cut down from a large circular carpet made for the round Drawing Room which had a diameter 36 feet. Difficult to estimate the original size of the carpet but could have been between 28’ and 32’ across. A gothic design using only six colours, with the main field in three shades (two terracotta and one bronze) mixed to give sophisticated shading effects. When the carpet was new, this shading together with the brown outlining, must have made the mid-olive gothic arches and roses stand out in a three dimensional way. Very skilfully drawn – the shading effects really are remarkable.