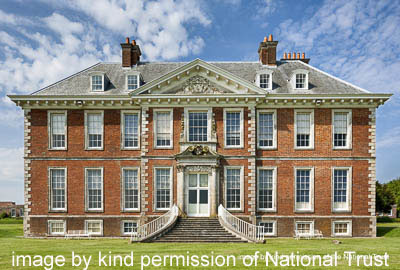 The house, set high on the South Downs, was built for Ford Grey (1655—1701), the first Earl of Tankerville, c.1690 and was sold in 1747 to Sir Matthew Fetherstonhaugh and his wife Sarah. Matthew and Sarah redecorated the house extensively from 1750 to 1760 and introduced most of the existing collection of household items displayed today, much of it collected on their Grand Tour of 1749 to 1751. Their only son, Sir Harry Fetherstonhaugh, added to the collection and commissioned Humphrey Repton to add a new pillared portico, dairy and landscaped garden. In the 19th century stables and kitchens were added as separate buildings, connected to the main building by tunnels.

Details
On 30 August 1989 the building was devastated by a fire caused by a workman’s blowtorch whilst repairing lead flashing on the roof, just two days before the work was due to be completed. The fire broke out during opening hours. Many works of art and pieces of furniture were carried out of the burning building by members of the Meade-Fetherstonehaugh family, National Trust staff and members of the public. Although the garret and first floors collapsed onto the lower floors and the garret and first floor contents were lost completely, the floors largely fell clear of the ground floor walls and much of the panelling and decoration survived. Much of the contents of the ground floor was crushed but not burned; metalwork was able to be straightened and cleaned, crystal chandeliers were able to be reassembled, and even the elaborate tassels on the chandelier ropes were able to be conserved. The decision to restore the house came after it was determined that restoration would be a cheaper insurance settlement than complete payout for a total loss. (Wikipedia)

Main field diamond diapered pattern of brown-olive leaves on a crimson ground. Each diamond contains four five petalled flowers (daisies?) in dusky pink. Main border of ‘foliage arabesques’ – acanthus scrolls ending in rosettes. At both ends, three scrolls on either side of a central ‘Prince of Wales’ acanthus. Along the sides, three scrolls on each side of the central acanthus, each scroll having a different rosette design. Inner border of square cornice design. Outer border a ‘Tongue’ design – alternating tongue and lotus.

A central biscuit coloured medallion within a blue main field with an overall design of stylised flowers, leaves and medallions in Turkish style. The whole design repeated in each half of the carpet, and is much more complex than on first impression. All the motifs outlined with a single line of dark brown knots. Inner, outer and main borders in buffs with zig-zag guards. Main field is a really dark lustrous blue, showing much better on the reverse. There are six main medallion designs repeated over the main field; Maltese cross in brown-olive with mid-rose. Four sectioned flower in either mid-rose or brown-olive. Variation on a lotus plamette – all identical. Variation on an artichoke palmette. X shaped medallion with small central flower and spear-like leaves. Halved medallions at either end of the central medallion.