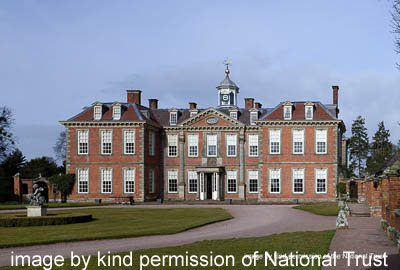 A large stately home, built in the early 18th century, standing in parkland at Hanbury, Worcestershire.
The main range has two storeys and is built of red brick in the Queen Anne style. It is a Grade I listed building. The associated Orangery and Long Gallery pavilion ranges are listed Grade II*.
Hanbury Hall was built by the wealthy chancery lawyer Thomas Vernon in the early 18th century. Thomas Vernon was the great grandson of the first Vernon to come to Hanbury, Worcestershire, Rev Richard Vernon (1549–1628). Rev Richard and his descendants slowly accumulated land in Hanbury, including the manor, bought by Edward Vernon in 1630, but it was Thomas through his successful legal practice who added most to estates, which amounted to nearly 8,000 acres in his successor Bowater Vernon’s day.

Details
Hanbury Hall is thought to stand on the site of the previous mansion, Spernall Hall, and Thomas Vernon first describes himself as ‘of Hanbury Hall’ in 1706, and this and other evidence leads to a likely completion date of about 1706. The date of 1701 above the front door is thought to be a Victorian embellishment, but no building accounts are known to exist.
Although Hanbury Hall appears to be of a very uniform style, the rear wall is clearly of a different and rather earlier style, and may mark the first phase of a building campaign when Thomas Vernon and his wife Mary first came into possession of Spernall Hall in 1692 when his bachelor uncle John Vernon died.
(Wikipedia)

Remade from several pieces, the largest of which is 12′ by 18′
Only the main field remains – all-over design of 2 hexagons, the larger on a green background (24 inches in length) containing a highly stylised flower design; the smaller on a black ground (21 inches long) containing a kind of palmette design. linking bands on a sky-blue ground.. In 1982 the carpet was bought for the National Trust and taken to Hanbury. It was in several pieces and has been skilfully matched and pieced together to fit the Cedar Room