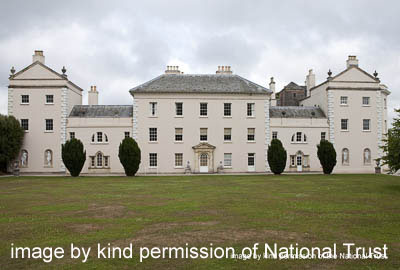 A George II era mansion located in Plympton, Plymouth, England. The house that can be seen today is the work of Robert Adam, who altered the original Tudor house on two occasions. The saloon (main drawing room) is sometimes cited as one of Adam’s finest interiors. Complete with all of the original decor, plasterwork and furnishings, Saltram is one of Britain’s best preserved examples of an early Georgian house. Originally home to the Parker family and Earls of Morley, Saltram House changed hands when, in 1957, it became a property of the National Trust, which operates it under the name “Saltram”.

Details
Saltram was home to the Parker family from 1743, when an earlier mansion was remodelled to reflect the family’s increasingly prominent position. It’s magnificently decorated, with original contents including Chinese wallpapers and an exceptional collection of paintings (several by Sir Joshua Reynolds). It also has a superb country house library and Robert Adam’s Neo-classical Saloon. (Wikipedia)

Three section carpet on a brown ground. The design exactly mirrors the ceiling. Large central square two-thirds filled with the central roundel. the corners filled with scrolling acanthus. Four identical rosettes at the centre of each side. Two rectangular end panels with scrolling acanthus, each branch ending in one of three different rose-pink flower designs – an eight petalled star flower, a tudor rose and a four petalled flower with points. The central roundel has a maltese cross with rose ground, with bell flower strands in the arms of the cross and in the centre of the cross, an eight sectioned sunburst cartouche enclosing a stylised rosette. The four elliptical panels between the arms and the surrounding border are filled with ribbon-tied sprays of natural flowers in true Whitty style, on a brown ground.

One of the largest by Thomas Whitty, exceeded only by the Music Room at Powderham and the later carpet made for the Prince Regent for the Music Room at Brighton Pavilion. This does not cover exported carpets, such as the one made by Samuel Ramsom Whitty for the Sultan of Turkey in 1826, which was the largest of all Whitty carpets. A large, rectangular carpet, divided into three main sections by a wide diamonded border with rosettes. The centre panel is square with ribbon-tied flower garlands all around the huge, central diamond, and sunburst rays in blues and buffs spreading from rose coloured three-leaf cartouches in each corner. The flower garlands are the usual lovely flowers in true Whitty manner – morning glory, primula, striped tulip, passion flower, anemone and rose.
Whitty was paid £126 for this carpet on October 2nd 1770.