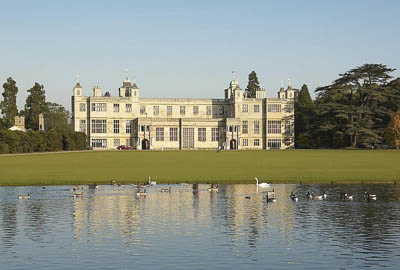 Audley End was the site of Walden Abbey, a Benedictine monastery that was granted to the Lord Chancellor Sir Thomas Audley in 1538 by Henry VIII. The abbey was converted to a domestic house for him and was known as Audley Inn. It was demolished by his grandson, Thomas Howard (first Earl of Suffolk, fourth creation, and Lord Treasurer), and a much grander mansion was built, primarily for entertaining the king, James I.
The layout reflects the processional route of the king and queen, each having their own suite of rooms. It is reputed that Thomas Howard told King James he had spent some £200,000 creating this grand house, and it may be that the king had unwittingly contributed. In 1619, Suffolk and his wife were found guilty of embezzlement and sent to the Tower of London but a huge fine secured their release. Suffolk died in disgrace at Audley End in 1626.
At this time, the house was on the scale of a great royal palace, and became one when Charles II bought it in 1668 for £5 for use as a home when attending the races at Newmarket. It was returned to the Suffolks in 1701. (Wikipedia)

Details
Over the next century, parts of the house were gradually demolished until it was reduced to its current size. The main structure has remained little altered since the main front court was demolished in 1708 and the east wing came down in 1753.

Tri-partite design with asquare main feild and two identical rectangular end panels, all with the same ground colour, now looking whitish but originally a silver grey. (Called white in the bill of receipt). The overall effect is now green and white. Main square has a diamond diaper pattern enclosing 4 pettalled, formal flowers. The central roundel has 3 concentric circles, the central roundel having a 12 leafed flower in olive browns on a now faded rose-pink ground. This is surrounded by a wide border with looped bell flowers. The outer circle has anthemion motifs of the same pink ground as the centre.

A very large Saloon carpet with a separate carpet of the same design fitted in the West Bay window. This window carpet and the carpet on the two stairs leading up to it have been replaced with modern copies. An overall, stylised Turkish floral design with main field and border on the same light pinky-brown ground now appearing beige. Main Field – stylised squared flowers – lotus, rose, tulips etc. All outlined in dark brown. Connecting stems all outlined in dark brown. There are basically two stem designs going the whole length of the carpet. Stem 1 based on 4 dark blue. 10 petalled formal rosettes and pink palmettes. Stem 2 crosses with pale blue lotus flower motifs and large rosettes on the cross. Large pink rosettes up the stem.