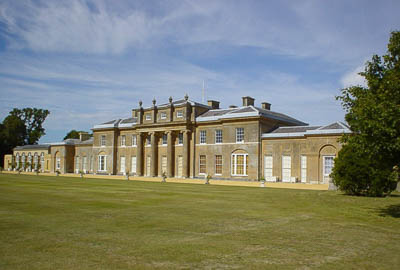 The estate was park of the Manor of Eastrop until 1223, when it became a deer park for the nobility. It was acquired by William Paulet, 1st Marquess of Winchester in the sixteenth century.
The property was built from 1683 to 1687 for Charles Paulet, 1st Duke of Bolton. It has 24 bedrooms and 20 bathrooms. The estate was inherited by his son, Charles Paulet, 2nd Duke of Bolton in 1699, followed by his grandson, Charles Powlett, 3rd Duke of Bolton in 1672. The grounds, known as Spring Wood, were designed by Charles Bridgeman, with additional buildings designed by James Gibbs. The estate was painted by Paul Sandby in 1764. This is a private home and not available for visiting. (Wikipedia)

Turkish style design on a raspberry-red main field with Turkish style main border. Main field of four large ivory coloured four pointed stars go down the middle of the main field with four halved stars down each side, creating six whole and four halved red medallions in the spaces between the points. Each star has at it’s centre a pink, eight petalled rose with amber and green leaves on a light duck-egg green background. The inner and outer borders of linked cs, together with the flaming guard, appear also on the carpet in the State Bedroom at Chatsworth. No documentary evidence for date, but circumstantial evidence points to a similar date ie c1815